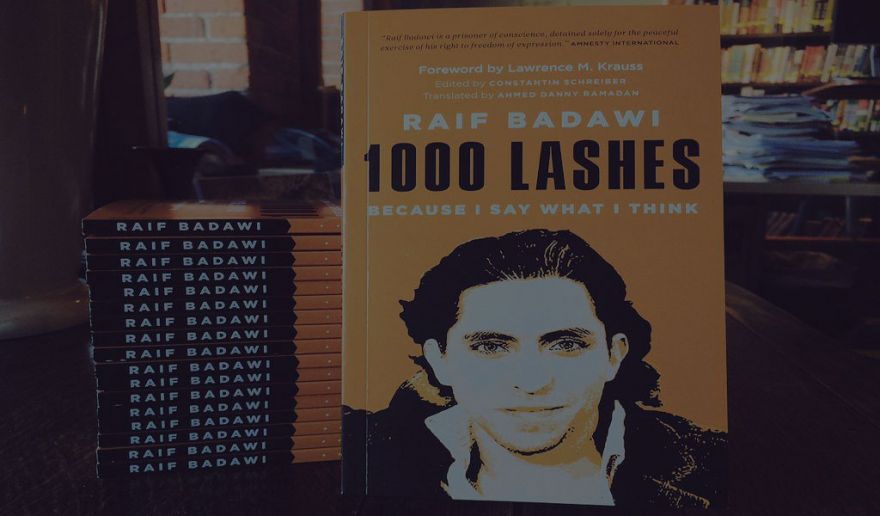 Raif Badawi's book of writings - "1000 Lashes, Because I Say What I Think" is available already in several languages - more translations are planned. The book can be purchased from Amazon worldwide, links below.

Proceeds from the sales of Raif's books go to his family.

As a way of supporting Raif, why not purchase a book and have it sent to your MP, MEP or other influential person?

This could well be the most important book you purchase in your entire life. Let us explain why.

This young man and father of 3 started a website in Saudi Arabia called 'Free Saudi Liberals' which mildly criticised his country's fundamentalist interpretation of Islam.

In 2012 he was arrested and imprisoned, then cruelly sentenced to 10 years in prison and 1000 lashes - to be carried out at the rate of 50 every Friday outside a Jeddah mosque for 20 weeks.

The first round of 50, carried out in January 2015, within days of the Charlie Hebdo shootings, brought international condemnation upon the government of Saudi Arabia. The next Friday, no lashings - with the authorities claiming 'he had not sufficiently healed' to take any more.

Continued protests around the world outside Saudi Embassies and fervent social media campaigns, along with representations from governments and international bodies such as Amnesty have so far pressured Saudi Arabia into no further floggings.

Raif still remains in prison. Fortunately, his wife Ensaf and 3 young children found refuge in Sherbrooke, Quebec, Canada. From there Ensaf bravely co-ordinates the worldwide campaign to free her husband.

Imprisoned but unbroken, Raif Badawi authorised the publication of the very blogs that had brought such a paranoid reaction from his government. First published in German in April, then in French in June, his book is now available in English.

Raif Badawi has become a symbol for free speech against totalitarian, authoritarian regimes throughout the world. His message is our message.

In purchasing this paperback, you are making a statement that you will not be silenced or threatened simply for speaking your mind against injustice.

In purchasing this work, you are making a statement to Saudi Arabia that their behaviour is not acceptable in the modern world.