Saudia Arabia has forced Sweden's foreign minister, Margot Wallström, to postpone an address to the Arab League. “The explanation we have received is that Sweden raised the situation with regard to democracy and human rights and that’s why they don’t want me to speak,” Wallström told news agency TT. 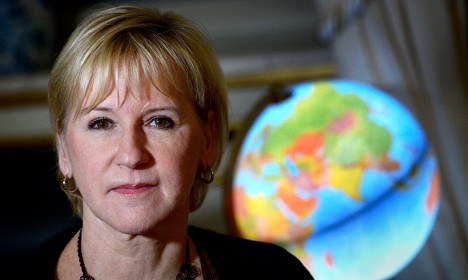 The secretary general of the Arab League, Nail al-Araby, had invited Margot Wallström to speak as a guest of honour at the opening of a summit in Cairo on Monday.

Wallström had planned to explain in her speech Sweden's rationale for recognizing Palestine.

She was also intending to speak about gender equality and the role of the Arab League in combatting terrorism.

Wallström said she had sought a direct meeting with the Saudis in light of the move to stop her speaking.

“So they can explain what upset them and why they were against me speaking here. But we haven’t got a response.”

The Foreign Minister is scheduled to leave Egypt on Monday afternoon.

Sweden’s government has come under pressure in recent weeks to end a controversial military arms deal with Saudia Arabia.

In November 2005 the then Social Democrat government signed a so called memorandum of understanding with Saudi Arabia. The deal was extended by the centre-right Alliance government in 2010 and will be extended for another five years in 2015 unless either party chooses to end it.