You may have seen the face of Raif Badawi, a young Saudi man, or a short article about him, or impressive efforts by The Independent, to bring attention to the cruel punishments inflicted on him by a series of deeply illiberal Saudi courts: 1000 lashes -- "very harshly," the flogging order read -- to be administered 50 at time for 20 weeks, or five months. 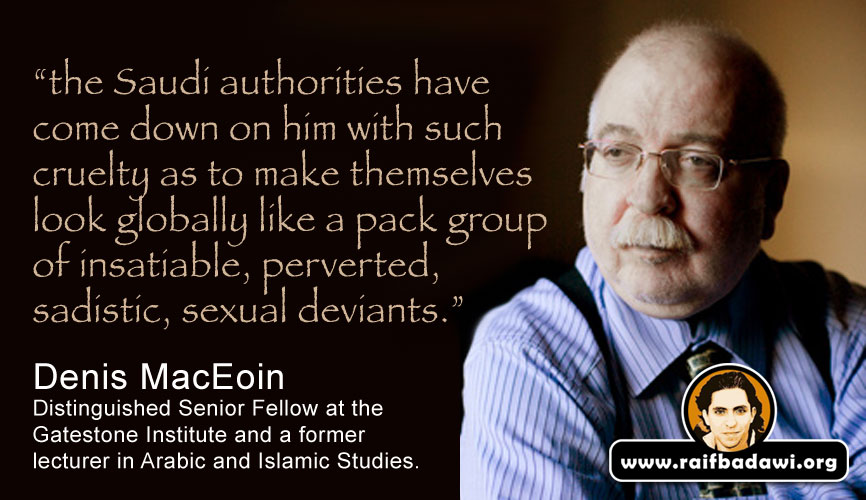 ARTICLE REPRODUCED HERE BY KIND PERMISION OF THE AUTHOR

Raif Badawi is a 31-year old author, blogger and social activist, who gently tried to introduce just the smallest traces of enlightened thinking to the government and the religious elite of Saudi Arabia from his home in Jeddah.

He did this mainly through a website and public forum entitled, "Free Saudi Liberals." An example of what he is now to be flogged to death for goes: "My commitment is... to reject any repression in the name of religion... a goal that we will reach in a peaceful and law-abiding way."

It is for unspeakable thoughts such as this that the Saudi authorities have come down on him with such cruelty as to make themselves look globally like a pack group of insatiable, perverted, sadistic, sexual deviants.

Badawi's life is in serious danger. He was detained briefly in 2008, on a charge of apostasy -- a crime that carries the death sentence in the Saudi kingdom. In the following year, his bank accounts were frozen and he was banned from travelling outside the country.

He was arrested again on June 17, 2012, in Jeddah, after organizing a conference to mark a "day of liberalism." The conference, which was to have taken place in Jeddah on May 7, was banned by the authorities. Several months later, on December 17, 2012, he first appeared before a General Court in Jeddah. This was not a court in the Western sense of the word, with jury selection, evidence, discovery, and so on. The vast majority of courts in Saudi Arabia are Shari'a courts, operating according to the rules of Islamic law and presided over by state-appointed clerics ('ulama). On this occasion, the charges against Badawi were outside the norms of international law: "setting up a website that undermines general security," "ridiculing Islamic religious figures," and "going beyond the realm of obedience." Some days later, the court decided to proceed with the charge of apostasy. More months passed, and on July 13, 2013 it was reported that Badawi had been sentenced to seven years' imprisonment and 600 lashes for violating Islamic values and propagating liberal thought. His website was shut down.

But the Saudi judges were not done with him yet. On December 26, 2013 a judge recommended that he be brought before a higher court on the apostasy charge, then on May 7, 2014 his sentence was increased, now totaling 1000 lashes followed by ten years in prison and a large fine of around $260,000.

Abu'l-Khayr, from a prominent family of religious judges and clerics, had been listed in Forbes magazine as one of the top 100 Arab writers on Twitter. His wife, Samar, is Raif Badawi's sister. Abu'l-Khayr had set up an organization named "Monitor of Human Rights in Saudi Arabia." He was sentenced to 15 years in jail, to be followed by a 15-year travel ban.

On January 9, 2015, Raif Badawi received the first of his planned twenty flogging sessions: 50 lashes each time, to be delivered after Friday noon prayers outside Jeddah's al-Jafali Mosque, across the road from the Ministry of Foreign Affairs. Badly hurt -- he is a diabetic and physically frail -- he faced almost certain death long before his punishment could be brought to an end. Doctors advised delay, and for many weeks, he was not subjected to further floggings.

In the meantime, an international campaign for his release started in earnest. Newspapers, magazines, radio and television stations across the West featured his story prominently. Everyone agreed that the prescribed punishments were cruel, inhuman, and degrading, and that the floggings amounted to torture, illegal under international law.

Criticism of Saudi inhumanity went to very high levels in Europe and North America. The U.S. State Department issued a strong statement on the affair. The National Assembly of Quebec passed a unanimous motion in condemnation. Britain's Prince Charles, long familiar with the Saudi kingdom, raised the issue with the new King Salman. On March 3, 2015, sixty-seven members of the U.S. Congress sent a bipartisan letter to King Salman, calling for the release of all prisoners of conscience, including Badawi and Abu'l-Khayr.

The Swedish government, in protest at the conviction, went so far as to cancel an arms deal with Saudi Arabia. Seldom have the Saudis come under such a volume of international criticism as they have done over this one affair. A discreet retreat and the freeing of Badawi and Abu'l-Khayr might have paid off well for a country with a new monarch, facing terrorism on all sides, and negotiating help in its counter-terrorism efforts even from Israel.

But to renewed outrage around the world, it was reported on June 7 that the Saudi Supreme Court -- originally thought to herald reform in the judicial system -- has confirmed Badawi's sentence finally in all respects. The only possible reprieve now would be a royal pardon. The judgement is, in effect, a slow, bloodthirsty, agonizing, death sentence handed to a man whose only concern was to speak gently but honestly in a country so backward that it prefers the outrages and injustices of seventh-century Arabia to anything, such as mercy, in the twenty-first century -- the technology of which the Saudis are all too happy to avail themselves.

The Saudis cannot have it both ways. On one level, they are only too happy to join the modern world, building skyscrapers, funding universities, training scientists, and benefiting from the many luxuries and conveniences the Western world offers them. On another level, they reject everything that makes the West strong -- freedom of conscience, thought and speech, an equal role for women in society, tolerance of other religions and philosophies, and the acceptance of either international law or the most elemental human rights.

Tomorrow, governments and rights organizations, along with ordinary citizens, will meet to plan their response to this abuse of decency.

If Raif Badawi is flogged again, and if he should die, his wife be widowed and his children orphaned, and the reputation of Saudi Arabia, already mired in the mud, will sink to a point beyond which it may never regain the trust or support of anyone. There is already unrest in the kingdom. The Saudi kingdom and its extremist cult of Wahhabism, its clerical elite, and its pompous princes know that they face attack from the Islamic State, and from Iran in Yemen and across the Gulf. Young Saudis, bribed and brainwashed though so many are, are not fools.

The Saudi Supreme Court's judgement is worse than burying one's head in the sands of the Empty Quarter [al-rub' al khali], a large, almost uncrossable desert in Saudi Arabia. It is an admission of a complete inability to change, even while the world around it is shifting out of control.

What is happening to Badawi is also a perfect reminder to anyone who claims to be "offended" by "Islamophobia," why it might exist, who is to blame for it, and that it is precisely behavior such as this that justifies it.

Everyone who thinks and feels will continue to work and pray for Raif Badawi's release and his return to his wife and children at their home in Canada, where they obtained political asylum in 2013.

Denis MacEoin is a Distinguished Senior Fellow at the Gatestone Institute and a former lecturer in Arabic and Islamic Studies.